The 1st Mini Album 'BASE' 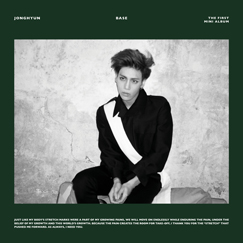 The 1st Mini Album 'BASE'

JONGHYUN, Releasing His First Solo Album, ‘BASE’, on January 12!
Participates in the writing of all songs, proving his artistic quality as a singer-songwriter!
Making news for the special collaboration with musicians known for their skills!

SHINee’s JONGHYUN is releasing his first solo album, ‘BASE’, on January 12.

JONGHYUN is a member of SHINee, the group enjoying worldwide fame with unique music styles and powerful performances, and has been known for his musicality through the charming tone of his voice, outstanding vocal skills and excellent song writing skills. The new images he is going to put on through his first solo album is raising expectations for the album immensely.

Especially, this new solo album titled ‘BASE’ has a list of 7 songs in various genres, which have the perfect mixture of JONGHYUN’s musical sensibility and unique mucical talent of participating musicians. The collaborations with famous musicians such as Wheesung, Younha, Zion.T, and Iron elevated the degrees of perfection.

Previously, JONGHYUN has participated in the writing of various hit songs of SHINee such as ‘Juliette’, ‘Honesty’, ‘Spoiler’ and ‘Selene 6.23’.Also in writing lyrics for songs in the album and in composing and songwriting for other artists such as ‘Gloomy Clock’ of IU. For this album, he has participated in the songwriting of all songs including the 4 of his own songs to make a strong presence as a singer-songwriter and will mesmerize fans with a riot of color and his unique sensibility.

The title track, ‘Crazy(Guilty Pleasure)’ is a medium tempo retro pop song inspired by Neo-Soul and punk, and featuring of rapper Iron doubled the charms of the song. Also, the lyric that describes ‘Guilty Pleasure’ along with phrases such as ‘The Reason I am attracted to danger, the reason I discreetly enjoy it more’ is quite interesting.

An Ambitious Work of JONGHYUN as a Singer-Songwriter! The Double-Titled Song, 'Déjà-Boo’

'Déjà-Boo’, the double-titled song of the album written and composed by Jong Hyun, is a retro punk song with outstanding synthesizer with retro style and funky rhythmic bass. The hip-hop musician, Zion.T, has participated as a co-composer and a featuring rapper, and the song was titled ‘Déjà-Boo’, suggestive of ‘Deja vu’, combining French words ‘Déjà’ meaning ‘already’ and ‘Boo’ meaning ‘Baby’ to draw fans’ attention.

JONGHYUN Writes Lyrics for All Songs and Writes 4 of His Own Songs!
Pay Attention to 'Déjà-Boo’, ‘Love Belt’, ‘NEON’, and ‘Beautiful Night’

‘Love Belt’, a duet song harmonized with the sweet voices of JONGHYUN and Younha, is a medium tempo R&B track with an attractive string quartet, and its lyric depicts the anxiety of love.

‘NEON’ is a medium tempo R&B song that perfectly combined the lyric filled with JONGHYUN’s excellent sensibility and the heartrending yet sexy melody, and the tight melody and opulent harmonies of the background vocal which flatter Jong Hyun’s outstanding singing ability is charming. Also, the bonus track, ‘Beautiful Tonight’, is an urban soul track that adds to the joy of listening through JONGHYUN’s unique sensibility.

‘Hallelujah’ starts from the calm melody in the introduction and develops into the magnificent sound with the addition of the choir harmony in the second half of the song, and the lyric written by JONGHYUN and Wheesung sensuously expressed the joy about the existence of the loved ones, and ‘MONO-Drama’, a medium tempo R&B song with the impressisve lyric, likened the sad emotion of the unrequited love to a mono drama. All 7 songs in the album present the diverse colors of JONGHYUN’s music.

Meanwhile, JONGHYUN will be promoting his first solo album, ‘BASE’, on various stages.