SHINee The 4th Album – Repackage 'Married To The Music' 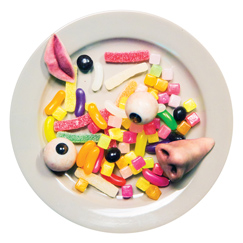 SHINee The 4th Album – Repackage 'Married To The Music'

K-POP Leader, SHINee, heated up the pop music world globally with the 4th regular album, ‘Odd’, and is releasing the repackaged version of the album, ‘Married To The Music’, on August 3rd.

This repackaged album was prepared to send the gratitude to the fans for enthusiastically supporting and giving cheers for the 4th album, ‘Odd’, and 4 new songs: ‘Married To The Music’ which is the title song for this repackaged album, ‘SAVIOR’, ‘Hold You’, and ‘Chocolate’, are added to the 11 songs from the original album, and all 15 songs are expected to win great interest of fans globally once again as they present SHINee’s music in greater diversity.

SHINee received enthusiastic responses from fans for the 4th regular album, ‘Odd’; they swept various digital track and album charts at home, ranked No. 1 on iTunes Albums Chart in 6 Asian regions, topped Billboard’s World Albums Chart in America, and came first on the Most Viewed K-POP Music Video in America and Around the World on YouTube with the M/V for the title song, ‘View.’ The band also demonstrated their impact by winning a total of 9 trophies on terrestrial and cable music programs to prove themselves as the true leader of K-POP.

The title song of this repackaged album, ‘Married To The Music’, is a funky disco song written by LDN Noise, the British composer team that composed ‘View.’ The lyric impressively compared various emotions one feels when falling in love with music and SHINee’s signature performance showing the perfect team work of all members will draw eyes and ears of the fans.

‘SAVIOR’, touched by the famous composer Kenzie, is a funky electric dance track, and the trendy and sensuous lyric captures ears with the story of a man who becomes a captive of love and yearns for a savior and ‘Hold You’ which sings about the sadness of love is an R&B creating a warm and beautiful mood and the musicians of various genres including the world-renowned Stereotypes, Deez, Bum-joo Kye, Dong-hyun Kim shared their talent for this song, adding to the perfection of the song.

‘Chocolate’ is a funky medium tempo R&B track, and its lyric, written by SHINee’s JONGHYUN and the hip-hop artist Yankie, likened a story of love toward a charming woman to the sweet chocolate to double the attraction of the song.

Meanwhile, SHINee’s repackaged album, ‘Married To The Music’, will be released as digital tracks and an album on August 3rd.