TAEMIN The 1st Album “Press It” 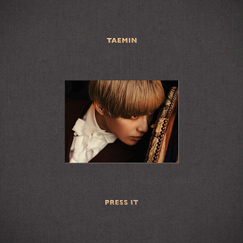 TAEMIN The 1st Album “Press It”

SM’s super ace TAEMIN of SHINee will release his first regular album ‘Press It’ on February 23.

This is TAEMIN’s solo album after about a year and a half since releasing his mini-album ‘ACE’. It contains a total of ten tracks of various genres including the title song ‘Press Your Number’, and will be more than enough to see the diverse musical colors and charms of TAEMIN.

In particular, this album was joined by a number of domestic and international hit-makers such as Bruno Mars, Teddy Riley, The Stereotypes, LDN Noise, JONGHYUN of SHINee, Kenzie and G.Soul to raise the perfection of this album. It is also attracting attention by having TAEMIN writing the lyrics to the song for the first time since his debut.

TAEMIN has already been successful as a solo title track of his previous album ‘Danger’ in which he displayed unique musical styles and performances to not only sweep various music, album and music video charts in both Korea and abroad, but also took over the first place in music ranking shows. Thus, attentions and expectations are rising for his new music and performances in this album.

Blockbuster Title Song ‘Press Your Number’, Collaboration of Bruno Mars and The Stereotypes!

The title song, ‘Press Your Number’ is an urban pop dance track created by the global pop artist Bruno Mars and the world’s top producing team, The Stereotypes. The lyrics that TAEMIN wrote talks about the sad feelings of waiting for a loved one and will give the audience to meet more matured musical sentiment.

‘Already’ is produced through the collaboration of SHINee’s JONGHYUN, who is one of SM’s top singer-songwriters and the world-acclaimed producer Teddy Riley, and this is an R&B ballad track highlighted with sweet piano performances. ‘Soldier’, which TAEMIN choreographed the performance and wrote the lyrics, is a ballad that draws attention for the lyrics that compare the want to protect a loved one to a soldier.

‘Drip Drop’ is an R&B-based future bass genre track that offers a magical ambience with the sounds of kicks, drums and synthesizers. In addition, ‘Guess Who’ is a powerful dance song with various sounds including sirens and gun shots on top of a powerful rhythm made with electronic guitars and ‘One By One’ is a song that harmonizes the refined and mysterious mood of the track with the lyrics that compare a girl that he loves to a ‘mirage’.

In addition, the dance track ‘Mystery Lover’ creates a dreamy atmosphere with orgel sounds and rich choruses. ‘Sexuality’ is a Euro-pop dance track with a retro style highlighted with a sexy, yet sharp singing style. ‘Until Today’ is an R&B track with a minor-style emotion that talks about the sadness of breaking up and ‘Hypnosis’ is a ballad with an impressive style of singing as if speaking with a calm and genuine voice. These ten tracks are expected to be combined to create an album to enjoy the boundless charms of TAEMIN.