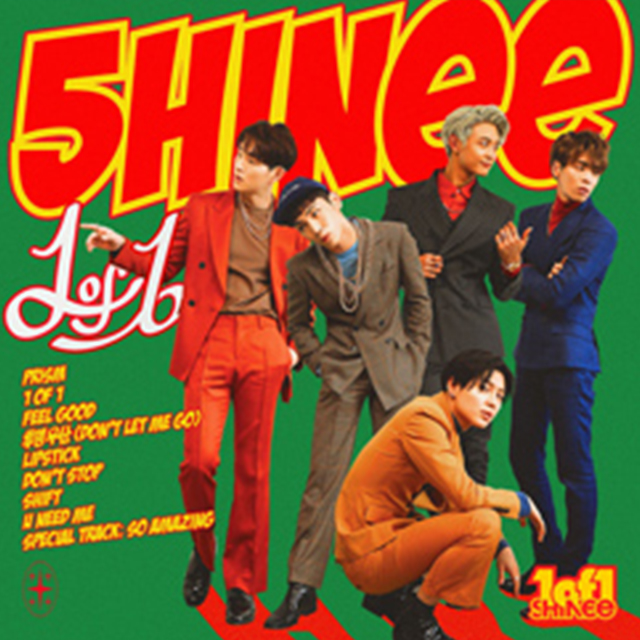 K-POP leader, SHINee, is making a splendid return with the release of the fifth regular album, ‘1 of 1’, on October 5.

This album comprises nine songs in various genres from R&B, pop, to dance including the new jack swing style title song, ‘1 of 1’, and it will present SHINee’s world of music which has become more intense and deeper with the charms of SHINee members, as a number of hit makers like the famous composers Kenzie and Deez and the world-renowned producing teams, The Underdogs, Stereotypes, and LDN Noise joined with their efforts for the album, JONGHYUN who has demonstrated his talent as a singer-songwriter participated in composition and writing, and SHINee members also wrote lyrics.

Especially, for SHINee has been releasing hits while being recognized for novel innovations and unique music style and swept the top ranking on domestic and foreign charts such as ‘Odd’, the fourth regular album which released in May last year. With the music video for the title song ‘View’, it swept first places on domestic digital music and album charts and television music programs, topped Billboard’s World Albums Chart, and also set the record of the most watched K-POP music video in America and the world on YouTube for the month of May, 2016.SHINee’s promotion for this album is being watched with keen interest.

The title song of the new album, ‘1 of 1’, is a new jack swing song that prevailed during the 90’s, and it features the retrospective emotion combining funky rhythm and gentle R&B melody, elegantly expressed in SHINee’s own colors together with the lyric that says “only one love” is given to one woman.

Also, JONGHYUN participated in the composition of the two-step style pop song, ‘Prism’, and presented a new and interesting sound by infusing an electronic track with R&B melody; and ‘Feel Good’ is a dance song that combines the retro sound of the 80’s and modern electro-pop sound and features quite addictive hook.

Also, ‘Don’t Let Me Go’, rap written by MINHO and KEY, has interesting melody that dimly resounds in the intro lyrically expressed the parting scene blurring through the tears. ‘Lipstick’ by the world-renowned producing team, The Underdogs, is an up-tempo R&B, featuring emotional melody that creates a romantic mood and the elegant chord progression.

‘Don’t Stop’ is an urban R&B song featuring dreamy sound composed by the leading producing team, Stereotypes, and JONGHYUN, MINHO, and KEY wrote the lyric, reflecting their intent to show SHINee’s unique originality through the songs of their fifth regular album. ‘SHIFT’ featuring synthesizer and deep bass sound, has unique sound of the 80’s, conveying the charming message of invitation toward a higher state of love.

‘So Amazing’, Written by ONEW for Fans to Express His Happiness He Felt When Meeting Them Up Close at Concerts, Included as Special Track!

Also, ‘U Need Me’, is a jazzy up-tempo song with prominent band sound made of funky bass and brass that gives the feeling of traveling in the space in search of an unknown star and ONEW wrote the lyric for ‘So Amazing’, the special track for the fans, by comparing the happiness he feels when SHINee meets fans up close at the concerts to taking a drive out to the coast with a lover.