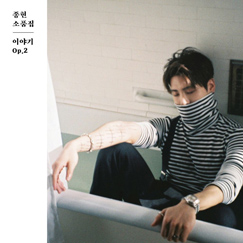 Singer-songwriter, JONGHYUN, is releasing The Collection ‘Story Op.2’, containing a tracklist of songs that were all self-composed by him.

The songs in the tracklist, including the opening track ‘Lonely’ and ‘Where Are You’ (bonus track only available in CD), are specifically arranged according to the four seasons to fit the mood of each song. His new collection album will be presenting a more mature and deeper interpretation of JONGHYUN’s music. In addition, despite his busy schedule overseas and in Korea, JONGHYUN has put a lot of effort and dedication into putting the album together. He had devoted his free time to writing music, and participated in directing and designing his album,

It is a well-established fact that JONGHYUN has been recognized for his unique voice and vocal abilities as a SHINee member. However, JONGHYUN is now not only recognized as a talented singer but also as a composer of multiple hit songs, such as IU’s ‘A Gloomy Clock’, LEE HI’s ‘Breathe’, EXO’s ‘Playboy’ and Kim Ye Rim’s ‘No More’. With multiple songs being a hit, JONGHYUN’s new album is filled with a broader range of music that are expected to carry songs that will also hit the charts sky high.

Accentuating the simplicity of the arrangement, JONGHYUN used moderate sequence and instruments in ‘Lonely’ to enhance the serene tones of the song. The song is led with gentle piano tunes with string sextet layering the music beautifully. Teaming up with TAEYEON has enabled JONGHYUN to create a conversation like duet. The two singers express the emotions and the comfort of being alone rather than feeling lonely when together in the song. ‘Lonely’ is expected to be a sure hit, especially since the song is a special collaboration with TAEYEON.

JONGHYUN goes beyond a single genre and presents various styles that he is capable of within the album. For instance, songs such as ‘Blinking Game’ is arranged as a standard jazz, while ‘Let Me Out’ uses PB R&B to build up emotions of the song. Finally, there’s ‘Fireplace’, a neo-soul music, in which the dark and dramatic tunes reflect the mood of the song.

JONGHYUN’s self-composed songs that were played on his radio ‘Blue Night’ on MBC FM4U were also rearranged and added to the album due to the positive response. In order to thank his fans for listening to his radio for 1000 days, he specially composed a romantic song titled ‘1000’ to express his appreciation. Few of his other self-composed songs are: ‘Just Chill’, which is a bright and easy going song, ‘Love Is So Nice’, a rhythmic R&B track, and ‘Our Season’, which is a mid-tempo pop song containing his appreciation towards his fans for their continuous support.

The album includes the newly arranged version of ‘Elevator’, a ballad initially released on Mnet’s ‘Monthly Live Connection’. ‘Where are you’ is a bonus track that is specially carried within the CD album. JONGHYUN shared a short preview of ‘Elevator’ at KBS 2TV’s ‘Yoo Hee Yeol’s Sketchbook’, where the lyrics expressed the sadness of not having a girlfriend, when even a cockroach has one. The fun lyrics earned a lot of laughter from the crowd, and people are looking forward to the full version of ‘Elevator’.