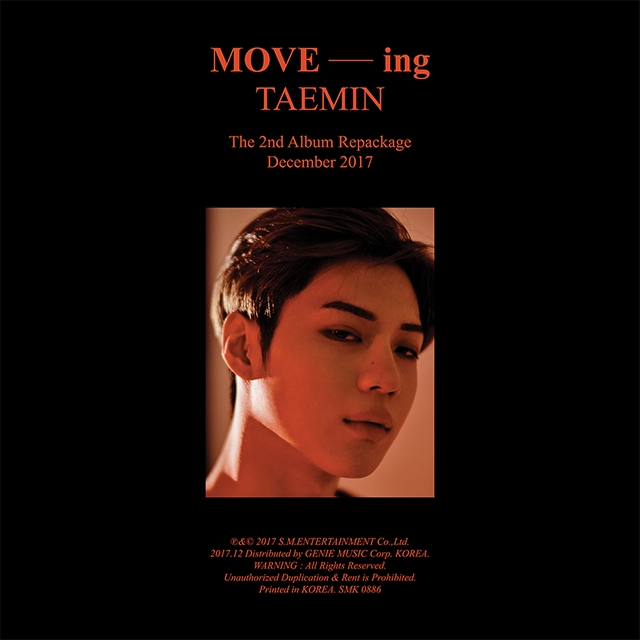 This album includes a total of 13 songs, including 9 songs from his second album and four additional songs. Just like the title of the album, ‘MOVE-ing’, the album contains double meanings that TAEMIN is continuously trying something different just as he had brought new music and performance through his 2nd album, ‘MOVE’. The album also contains the meaning that he will ‘present music that moves the hearts of listeners’. So TAEMIN’s transformations are being watched with keen interest.

Especially, TAEMIN has won immense popularity in Korea and internationally after placing No.1 on Korean album charts and also on iTunes Albums Chart in 12 regions around the world with ‘MOVE’, the 2nd album he had released in October. TAEMIN proved himself as an unrivaled performer through the sensation created by the so called ‘MOVE Syndrome’ with title song ‘MOVE’, featuring moderate charisma and sophisticated performance. This repackage album is also expected to win great responses.

The title song, ‘Day and Night’, is a medium tempo pop song with charming classic guitar and cello melody. The lyrics tell a story of an unforgettable love and compares this to a melody that lingers in the ears that makes you want to hum along.TAEMIN’s participation in writing and composing the song is also raising the expectations.

Another new song included within this album is ‘Snow Flower’, a ballad song written and composed by singer-songwriter, Jung Joon Il, which brings out TAEMIN’s detailed expression of his emotions. The arrangement and the calm piano sounds of the song create a deeper winter mood.

In addition, the album includes the Korean version of ‘I’m Crying’, which was part of his 2nd mini album released in Japan, along with ‘Hypnosis’, included in the 1st album, that was newly arranged with live band sounds. Both of these songs were performed at his first solo concert in August and has won enormous responses. Listeners will be able to listen to both of these song and also fully experience TAEMIN’s deeper music.