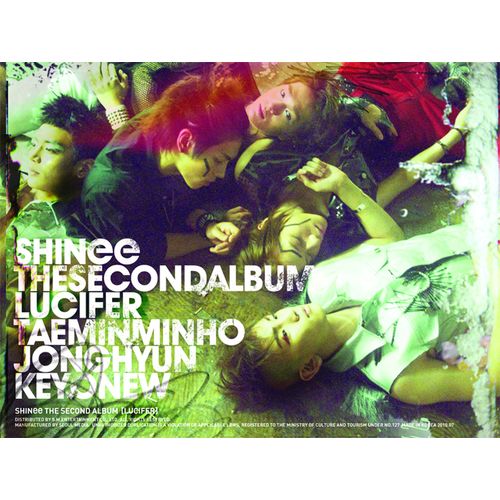 SHINee is back with the 2nd Album ‘LUCIFER’
Ready to Rule the Popular Song World in This Summer with Quality Music
and Extreme Makeover Suggesting the New Trend!
13 Songs in Various Genres Presenting SHINee’s New Charms!

SHINee, the group that enjoyed great popularity with ‘Ring Ding Dong’, is coming back with the 2nd album on the 19th, announcing fantastic performances.

The 2nd album is a new one coming in 9 months after the release of the 3rd mini album, ‘2009, Year Of Us’, which was released on October 19, 2009. SHINee has continued the parade of hit songs one after another with sophisticated music and performance from ‘Replay’, the debut song, to ‘Ring Ding Dong’, the title song of the 3rd mini album, the title song of the 2nd album, ‘LUCIFER’, is also expected to win great responses from music fans.

As much as this is the 2nd album, songs were more carefully selected than ever, and it gives listeners a great chance to experience the diverse musical characters and more mature vocal skills of SHINee members that the title song as well as all other songs in the album are expected to capture the ears of many listeners.

Like the teaser photos of SHINee members opened to fans from the 8th to the 12th became the most frequently searched word in the portal sites, many music fans are showing great interests and expectations for the return of SHINee even before the release of the album, and their music, choreography, and even fashion will become the hottest topics of the media again this time.

The title song, ‘LUCIFER’, is an urban electronica style song built on the electronica style of the 1980’s, the period when the break dance was popular, and the melody and the sound of synthesizer were composed in a more modern style to deliver cool and refreshing feelings and the addictive charms of the song through powerful and sophisticated rhythm.

The lyric compares a girl to ‘LUCIFER’ who repeats threatening and conciliating her lover as if she has the faces of both angle and devil, believing that selfishness and obsession are also other forms of love, and the members of SHINee make a sensible appeal to the girl that love, future, and everything will perish if she ties the feelings of him down.

‘Your Name’ sings the feelings of young people in love and it has been the first song that O New wrote the lyric for, and fans will be able to experience the sensibility of O New for the first time. Jong Hyun also showed his lyric writing skills in ‘Juliette’ and this time he wrote the lyric for ‘Obsession’ which tells a story of a man grieving over the loss of love through rich voices and adlibs, and the touching emotion of the song is nicely presented through the lyric.

Also, ‘Shout Out’, the song built on powerful hip-hop rhythm with the rap written by SHINee members and unique melody line to present various charms will also attract the listeners.

Songs in the 2nd album are expressed in many genres to bring new attractions of SHINee: ‘UP & DOWN’ adds modern sound to the traditional old school hip-hop style, ‘Electric Heart’ creates a unique mood by combining electro hip-hop with the sound of Spanish guitar composed by Jinu who wrote ‘Abracadabra’, ‘Quasimodo’ is a ballad that gives the feeling of loneliness along with the impressive elements of rock, and ‘WOWOWOW’ doubles the fun of the music with SHINee members singing reggae style, and listeners will have great fun listening to the album.

The album also includes a musical gem to add perfection: ‘Life’ is a R&B song composed in a huge and splendid scale by the famous composer Kenzie, ‘A-Yo’ is the song that listeners will have fun singing along with the lyrical leitmotif, “A-Yo”, and ‘Love Still Goes On’ is kind of a sequel to 'Love should go on' which has been loved enormously from the 1st album.

SHINee will be appearing in various programs and starts with the release of the album on the 19th, announcing the conquest of the popular song world with ‘LUCIFER’ in this summer.