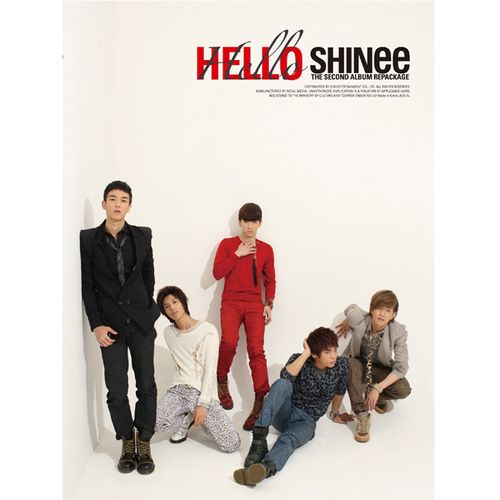 Following the fervently received second album ‘LUCIFER’ released 9 months after the third mini album, SHINee is releasing the repackaged version of the second album, ‘Hello‘, on October 4 for the new round of activities.

SHINee swept various music charts in Korea with the title song of the second album, ‘LUCIFER’, with excellent singing abilities and splendid performances, and they were also received favorably in Asia as they topped the Asian Chart of Channel V for 2 weeks in a row in Thailand and topped HITFM radio chart in Taiwan and the second Korean album licensed and released in Japan was ranked 8th in the ORICON Daily Album Chart. In other words, music fans are having the greatest expectations than ever about SHINee’s new songs.

While ‘LUCIFER’ showed strong and powerful charms, SHINee is going to present new charms that were not presented in the previous album with the repacked album that they are expected to receive great responses from fans with ‘Hello’ as they did with ‘LUCIFER.’

The elegant pop sound stands out in the title song, ‘Hello’, and the concise rhythm, repeated synth sound, cool and refreshing voices, and sweet harmony are combined to create a trendy R&B pop. The lyric expressing flutter of love felt from a special woman doubles the charms of the bright and gentle song.

‘Get It’ is a hip hop fully dressed in SHINee’s unique style, and the heavy drum and bass combination and the elements of the arrangement raise tensions rendering the song more impressive. The song also catches ears of listeners with the lyric written by Minho and Key as well as rapper Ceejay and singer Gilme. Another new song in the album ‘One’ is a soft R&B ballad that emphasizes the voice of each member of SHINee and the song becomes sweeter as the lyric built with fresh sensibilities carefully delivering the message of love makes perfect matching with the vocals.

The repacked second album, ‘Hello’, consists of 16 songs including 3 new songs presenting new charms of SHINee and 13 songs from the second album, and it will be released on October 4.

SHINee is expected to top the popular music world once again with sweet and gentle songs, presenting new styles with ‘Hello.’