SHINee The 5th Mini Album “Everybody” 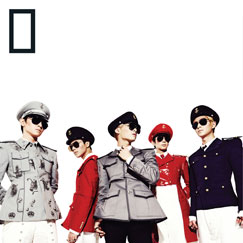 SHINee The 5th Mini Album “Everybody”

SHINee’s Fifth Mini Album ‘Everybody’ Hits Stores on October 14!
Essence of Contemporary Music by SHINee!
On the Way to Conquer the 2013 Music Industry with a Triple Hit!

After dominating the first half of 2013 with their third full-length album, SHINee will continue their hit streak by releasing their fifth mini album ‘Everybody’ on October 14.

This album will contain a total of seven songs conveying the colorful music of SHINee. Thomas Troelsen, Kenzie, The Underdogs, Jinbo and other domestic and foreign hit-makers collaborated to perfect this album.

Since their debut, SHINee has continuously pursued new and colorful music styles to create their own unique and colorful identity. Furthermore, their third full-length album that they released in February this year was higly praised by both the public and critics, thus showing their unrivaled status.

Thus, the mini album ‘Everybody’ is expected to be an album to show the core of the musical journey of SHINee . Like the title, it contains the unique identity of SHINee but at the same time anyone can enjoy SHINee’s music. Furthermore, it contains tracks that can freely communicate with the public making it more than enough to mesmerize music fans.

The title song, ‘Everybody’ is a complextro (complex + electro) genre number with a melody that anyone can easily hum along to, combined with funky rhythms. The lyrics talks about awakening the youth that sleeps in everybody’s hearts to take them to a world of exciting rhythms like the fable Pied Piper that takes the children under the cover of the night.

‘Symptoms’ was composed by the world famous producing team, The Underdogs, and the dreamlike ambience maximizes the charms of R&B slow jam. The lyrics written by Jonghyun make comparisons about being lovesick in various ways.

‘Queen of New York’, which describes a lovely scandal in New York, is an electronic dance music number that combines trendy sounds and refined pop melodies. Also, ‘One Minute Back’, which has impressive dramatic lyrics, is a fun pop track with stimulating grooves.

Other songs in this track such as ‘Destination’ that talks about the paradoxical theme of the fierce concerns of the generation that lives without concerns, ‘Close the Door’ that has beautiful melodies and harmonies and talks about bittersweet love, and ‘Colorful’, a medium tempo song that has exciting beats and a bright mood, make up the total seven songs in this album, and is expected to be received warmly by music fans.