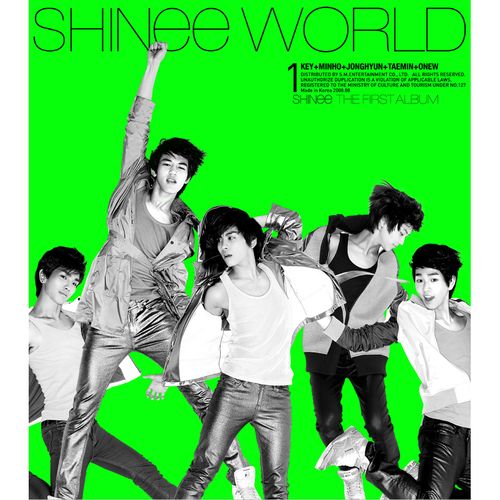 The World of Shiny Boys is Coming!
SHINee’s First Album ‘The SHINee World’, Release on August 29!

The hottest new band in 2008, SHINee’s first album, ‘The SHINee World’, will be released on August 29.

SHINee made a debut in last may with ‘Replay’ and has quickly emerged as the trend leader along while enjoying great popularity from elder female fans, and they will mesmerize the ears and eyes of music fans once again with the new music, dance, and fashion of the ‘Contemporary Band.’

Especially, SHINee’s first album ‘The SHINee World’ will let the listeners feel the unique characteristics of SHINee through 12 great songs in various genres including the title song ‘Love like Oxygen’ and songs in R&B, Urban, and POP styles.

Also, the high quality songs in the latest trend created by great musicians such as the hit composer Young-Jin Yoo, Young-Hu Kim, Kenzie, and hit lyricist and singer Wheesung and combined with new but skillful vocals of SHINee will definitely satisfy the expectations and interests of the people.

The Title Song ‘Love like Oxygen’, Full of Powerful Charms of SHINee

The title song of the first album ‘Love like Oxygen’ was remade with SHINee’s unique characteristics from ‘Show the world’, the hit song of Martin (Martin Hoberg Hedegaard) who is enjoying the highest popularity in Denmark now.

The rhythmical groove that combines the disco-based funky rhythm that reminds of Michael Jackson and the drum pattern that commonly appears in black music outstands in the song, and the lyric created jointly by Young-Hu Kim, the lyricist of 'Replay' and Yoon-Jung Kwon who wrote ‘Hug’ for TVXQI compared the change of love to the ice, water, and oxygen to sensuously express the pain of letting go the beloved one.

Especially, the stage performance for ‘Love like Oxygen’ combined with elegant choreography using chairs will let the audience feel the powerful charms of SHINee than the cute and fresh images that they had previously that they will capture the hearts of music fans at once.

Higher perfection through the best staff including Young-Jin Yoo and Wheesung!

Also, songs like ‘The SHINee World’, a piece by the famous composer, Young-Jin Yoo, that harbors the ambition of SHINee for the release of the first regular album, ‘One for Me’, an urban R&B style song created by singer and hit lyricist, Wheesung, ‘Love’s Way’ that put together the addictive melody line and sensual beats, and ‘Y Si Fuera Ella’, Jong Hyun’s first solo song that proves his rich vocalism and power of expression show the different dimensions of SHINee.

‘Last Gift’ which is like the prelude to ‘In my room’ and interprets the sadness and pain from being rejected from the first person every loved and 'In My Room (Unplugged Remix)' which was rearranged into magnificent and classical ambience with acoustic feeling will give unusual charms through the variations of the one of the first mini album songs, ‘In my room.’

This album also contains ‘Graze’, which put together trendy melody, simple and neat lyric, and stylish arrangement nicely, Urban Style의 ‘Best Place’, an urban style song that presents the rich emotions of SHINee along with elegant rhythm, and ‘Four Seasons’ which expressed the thoughts about the lover in four seasons, and total 12 songs in various genres will give great musical experience to listeners.

On the other hand, SHINee is quickly gaining great popularity from the title song, ‘Love like Oxygen’ released previously through internet music sites and mobile services on the 22nd and they will begin their activities for the first album in full starting with the appearance in SBS ‘Popular Song’ on the 24th and will continue to mesmerize the music fans through fantastic stage performances of the title song, ‘Love like Oxygen.’